One carbon monoxide symptom is like having a case of the flu...But please beware it can progress very quickly to unconsciousness, convulsions and death.

I was building a home in northern Wisconsin in February of 2004. The home was about 2000 square feet with a two story great room and loft...big wide open spaces. It had snowed during the night and the roof needed to be cleared before the shingles could be installed. So I grabbed my son-in-law and off we went. When we arrived at the house, I put Hugo to work on the roof and I went to start something else inside. When I stepped into the house it was immediately obvious that something was very wrong, the entire interior was saturated with condensation. The plastic vapor barrier and windows were soaking wet.

What in the world happened?

The day before the general contractor had put this old propane space heater in the house and vented it out through a window. The wind had blown all night, which had not allowed the exhaust from the heater to vent properly. The place was now a death trap.

I spent less than 10 minutes in the house and went to the roof to help shovel. When I got up on the roof I felt fine, however after only a couple of scoops of snow I nearly fainted. In 10 minutes, I was overcome by carbon monoxide gas. Fortunately when I went into the house the first time I left the door open...What if I hadn't and stayed in the house for 20 minutes...I didn't end up in the hospital, but I did spend the rest of the day on the couch.

Often I have imagined a very different out come... Where I would have passed out in the house. Then Hugo would have done the same, trying to save me. What a tragedy that would have been for my family. 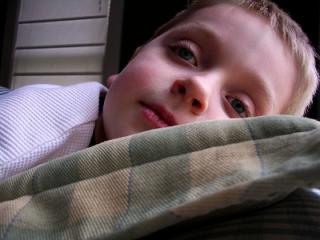 Notice that one carbon monoxide poison symptom is confusion...In Minnesota a man was arrested for DWI on a country road near his home. The following day his son was found dead in their home of CO poisoning. It was later determined that the father was in fact experiencing the effects of high levels of CO and was not intoxicated.

Other accounts have shown that this confusion inhibits the victims ability to even make a decision to call for help.

If there is one carbon monoxide symptom to remember...flu-like symptoms. Remember that if other members become ill at the same time, this would also be an indication of possible elevated CO levels. Also keep in mind that long-term low levels can have long-term health effects.

What's the level in your home?
Have you considered a CO alarm for your home?

Learn about CO sources in the home...